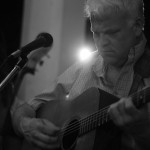 Michael’s musical roots were seeded by his father, Walter. He began playing banjo at age 13 and continued to study a wide range of musical instruments. Today, Michael teaches and performs various instruments including guitar, bass, mandolin and the low brass family. Throughout high school, he played with local string bands, school ensembles and toured with the Suncoast Sound Drum and Bugle Corps. During college he performed with Mr. John Fadis and the Bob Hope Show Band. Michael and Billy Sandlin, a guest performer on the Gypsy Wind CD, played with Bill Monroe at his final show in Tarpon Springs, Florida. His pursuit of a musical career has also enabled him to participate as an opening performer for bands including Crosby, Stills, & Nash, the Pat Metheny Group, Little Feat and Jefferson Starship. Michael and Gypsy Wind had the pleasure to accompany the legendary violinist, Vassar Clements, at the 2001 Florida Folk Festival. Today he shares his talents with a host of regional bands and teaches music locally.

Sorry, the comment form is closed at this time.